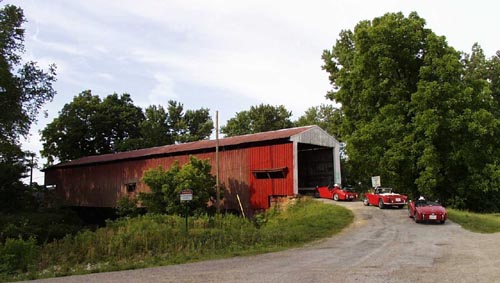 Here is TTR member Jackie Switzer’s story about travelling to the 1999 TRA national meet.
The photos are by TTR member Vern Burnett.

The Triumph Register of America (TRA) celebrated its 25th Anniversary this year. It was an event celebrated in style at the 1999 TRA Convention held in Dublin, Ohio, June 17-20 and ably hosted by Central Ohio Chapter Triumph Register of America (COCTRA). The REAL fun began long before the convention.
I believe it was Robert Louis Stevenson who held that to travel was more important than to arrive. Traveling TTR members Russ Seto (TR-3A), Vern Burnett (TR-4), Wayne and I (TR-3A), were traveling for the sheer pleasure of the journey. 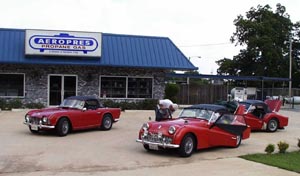 “Top up” weather is a rarity for our group but the weather was ominous.  In fact, we were plagued with rain most of the first two days out.  It rained too hard to just out run it and leaving the side curtains in created sauna-like conditions.  So we developed a TR-3 rhythm:  Stop, put side curtains in, mop the leaking rain; stop, take side curtains out, mop the sweating brow.  Vern wore himself out winding the windows up and down in the TR-4!
Our first serious debate surfaced when we turned onto La. Hwy 169.  The map showed a major state highway.  The reality was a rough, two-lane road with pot holes.  We chose to continue since there was some traffic and to go back meant passing through a band of pouring rain again.

Total mileage for the trip to Dublin was 1,888 miles. The plan was to cover as many miles as possible the first two days leaving time for sightseeing later. Traversing the Ouachita mountains and the Ozarks presented exciting views and challenging roads as the rain began to dissipate. 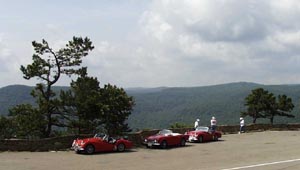 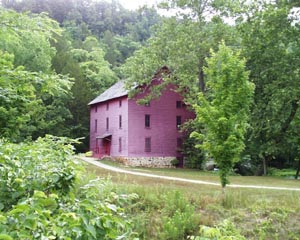 A grist mill in Alley Spring, Missouri, was our first sightseeing stop. This two-story historic roller mill was run by dammed water from a nearby spring.  Built in 1894 and still in use over 100 years later, the mill was painted a bright fuschia and sat on grounds luxuriant with greenery and wild roses.  Not too far up the road was Big Spring, considered the largest single outlet spring in the world.

Next stop was Cairo (pronounced like “Karo”), Illinois, to enjoy lunch and visit a quaint museum housed in “The Cairo Custom House.”  The fireplaces in each room throughout the building are for ventilation, not for heat. The building is filled with various objects depicting the town’s history including the desk used by General Ulysses S. Grant during the Civil War and an 1865 fire pumper.

Leaving Cairo, we were stopped for an extended period by a slow moving train.  Our three red cars attracted a lot of attention and provided a source of  entertainment for the town folk.  They in turn directed us to Olmstead to view a dam in progress.  I always wondered how they stopped a river long enough to build a dam.
We always began our travels in the early morning to take advantage of the cooler weather.  This day we needed jackets as we headed for our next stop, Greenup, Illinois, to see the overhanging porches.  Well, not everything can be spectacular, especially when one is working out of a guide book. 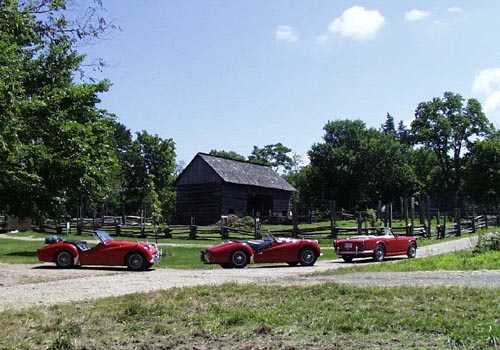 We were in Abraham Lincoln country and the “Lincoln Log Cabin” living history museum made up for the overhanging porches.  The cabin is a a replica of a two room saddle-bag style log house that belonged to Honest Abe’s father, Thomas, and his family.  The house and loft, smaller than most of our living rooms, housed 18 people.  The sign in front of the gate warned, “You are entering the year 1845.”  The costumed interpreters we met were based on actual family members who had lived in the house.  All went about the daily activities of an 1840s farm, caring for the animals, land, house, and cooking to feed the people who “lived” there, while maintaining characterization and speaking in the vernacular of the period.   During the school year, there is a waiting list for local school children who want to spend the day living in this period of history.

One young girl told me she “greatly admired Miss Bales who was 15 and a half and could cipher and even read a whole book by herself!”  Learning we were from Texas, one woman expressed concern over their men who were being sent to fight there.

By noon we were enjoying lunch in Arthur, Illinois, Amish country.  We spent most of the afternoon visiting the shops.  There is a downtown area but the most interesting shops are scattered in the countryside where they do not use electricity to run the machinery.  When necessary, propane supplied by pipes protruding from the walls and topped with a Coleman lantern type mantle supplements natural interior lighting.  Many shops are adjacent to the Amish farms and homes of the people  who own them.  Bicycles, horses, and buggies are common sights on the road and at the omnipresent hitching posts.  The dry goods store had everything from mousetraps, needles, and quilting supplies, to homeopathic medicines. Beechy’s, a grocery store, offered many familiar products plus goods bagged from bulk, such as tapioca, dried fruits, spices, flours, thickening agents, and more. 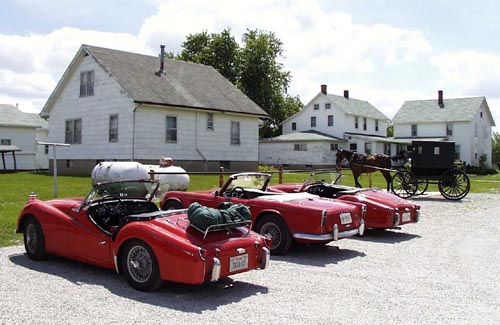 Four Acre Woods showroom had a myriad of wood products and Amish quilts but the most interesting part was the shop next door where all the woodworking equipment is run by compressor, not electricity.  The last stop was a canvas shop where women were hard at work making canvas tents on their compressor run sewing machines.  Wearing a dress with pinked sleeves and fastened down the front with straight pins, the head seamstress politely told our group they weren’t interested in making tops for cars.

Billie Creek Village in Rockville, Indiana, was our home for the night.  An evening walk to stretch out the kinks in the legs after so many days of driving led us to a covered bridge.  Fireflies were everywhere so that the area was reminiscent of twinkling decorations at Christmas. 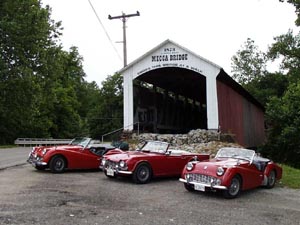 We set out the next morning determined to see as many of the 32 covered bridges in Parke County, Indiana, as time allowed.  Loveland, Ohio provided a nice break with home hospitality by Russ’ brother and sister-in-law, Stan and Norma Seto.  Shortly after our arrival, the men had their heads buried under the cars’ bonnets.  So far our group had weathered only one loose generator wire and a staple in a tire. Fortunately, we had not needed to use the myriad parts carried in the boots.  Stepping across the street to view a neighbor’s Statue of Liberty memorabilia and brick collection cleared the garage briefly.  Norma and I visited the antique shops in town the next morning while the cars were being loaded.  Then we were all off to our final destination with Stan (TR-3A) leading the way.

Four little red cars hurrying down the highway to Dublin, Ohio:  We arrived at the convention site too late for an unannounced antique shopping tour but just in time for a sandwich supper and to meet Doug and Nancy Trapp.  The Trapps, from Raymondville, Texas, had arranged to join our group for the festivities.  They were traveling in their “TR Motorhome” since their TR-3 is in the process of restoration.

The TRA is a great event to learn all the nitty gritty details of assuring your TR-3/4 is historically correct.  Triumphs from around the country toured Ohio’s capital city of Columbus to see a replica of Columbus’ ship the Santa Maria, view the Capitol, and visit the Brewery District to lightly sample its wares.  Did you know Ohio is the only state that does not have a rectangular state flag?  It has a pennant.

An early morning breakfast run got the next day off to a good start.  That was followed by a Fun Rallye that had some unplanned detours arranged by the city.  Hopelessly confused, engine overheating, sun beating down, Wayne and I opted to spend a couple of hours in the laundromat.  Russ and Doug had no problems and won 2nd place in the event.  Our group topped the day off with dinner at a German restaurant, the annual meeting and auction.  The awards banquet was held Saturday night. 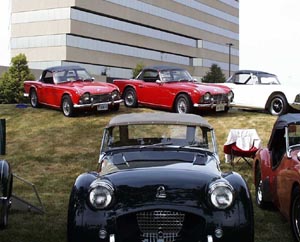 While 127 cars registered for the event only 23 entered Concours.  Russ was awarded a Gold Certificate and Vern received a 2nd place award.  Stan earned a 3rd place in the photo contest and the TTR Traveling Triumphs were the uncontested winners of the Long Distance Award.  Everyone received a souvenir Christmas ornament with the event logo imprinted.  The highlight of the evening was the drawing for a partially restored and running TR-3.  Each registration was given one chance on the car.  Wayne made it to the final six before being eliminated.

The trip home is always a steady rhythm of driving, eating, and sleeping.  Along the way we had starter trouble but it was deemed more expedient to extract the starter and push the car to start it than to try reworking the part.  Our generator was the next to go but was quickly replaced by ace mechanics Russ and Vern.   Finally, we had an almost flat tire on a surprisingly stubborn wheel.  The problems were few considering the number of miles we covered, approximately 3,500 in 10 days.  The pleasure of the journey was immeasurable.

See you on the road…