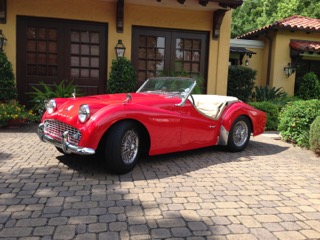 Our October Star Car is owned by Dave Stetz and this is what he has to say about it. 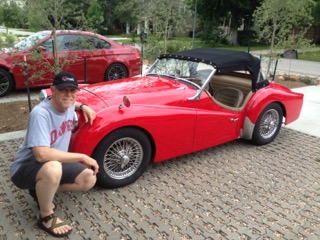 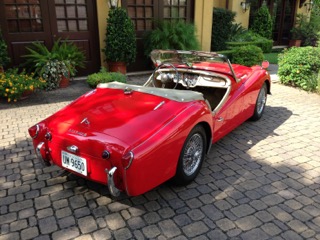 it on-line and talking to the dealer, I hired a local technician, Bill Trier of Venice, FL, to inspect the car. He gave it a clean bill of health and I had the car shipped to Houston. Had I known all its modifications (engine, brakes, steering, electrical, etc.), I probably would have been scared to buy it, but as it turned out, the changes made it a better driver.

The car had been registered to Gordon Carberry of Pamlico, NC since 2007. Unfortunately, my attempts to contact Mr. Carberry were unsuccessful, so I know nothing of how the car was modified and maintained. It’s clear that Gordon, or a previous owner, had expended a lot of effort, time and money to make this car a great “driver” without destroying its character.

The body is completely stock and rust free. According to the factory record, the car was originally Signal Red with a black leather interior and white top. Options included wire wheels, whitewall tires, tonneau cover, heater, adjustable steering column and hoodstick cover. The current top and side-curtains are black and have never been used. It also has a “bimini” top, handy on hot summer days.

The engine has been modified with TR4 (HS6) carburetors and intake manifold, alternator, Mallory electronic ignition, screw-on oil filter and an aluminum radiator with electric fan. It may have a larger displacement engine, but this has not verified.  The engine number does not match the factory record, which makes me think it’s been modified.

What I like most about the car is it’s a refreshing analog alternative to my other hi-tech, computerized vehicles. Runs strong, very reliable and I can actually do some work on it myself. Parts are cheap and readily available. Also, people respond to it, wondering what it is, remembering one they had in school or the one their Dad drove. My wife loves it, too. That always helps.

What I like least about the car is not so much a negative about the car, but it’s small and vulnerable in traffic. One bump from an SUV and I’m toast. So I drive it like I would a motorcycle or bicycle. Very aware of my surroundings.