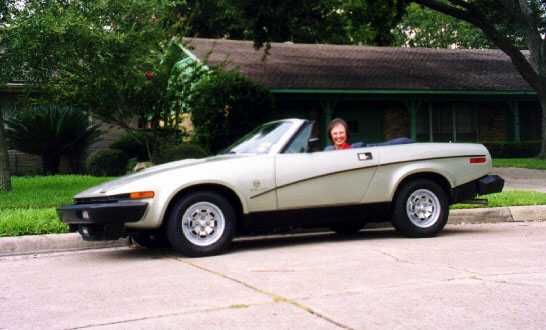 This Wedge is a beauty! Diane writes: “I first became intrigued by TR-8s when I saw my first one at the 1997 VTR regional meet in Georgetown. Both Richard and I really liked the ones at the show, particularly one that was pulling a trailer.
“The next time I had a chance to see one was at the VTR nationals in Ft. Worth. There I first noticed an especially nice little fuel-injected platinum car with a beautiful Mercedes-blue top. Seeing the judging sheets later, it was apparent that this top caused the car to lose concours points and drop from first to third at the show.

“I really liked that car. It was so neat, and had air conditioning that worked! I again saw it at the 1998 VTR regional in Oklahoma, where it finished second because of that top.

“Soon after that Richard’s office relocated and we needed to find a car for me. Richard and I were looking at all possibilities, including the VTR web page. One night to our amazement, he saw that the TR-8 I liked so much was available. We checked it out, made an offer and bought it.

“We had a couple of minor problems up front that Ron Harrison, the wizard of First Colony, fixed. Since then, it has been the most cool, dependable daily driver. And now it even has the correct top!”