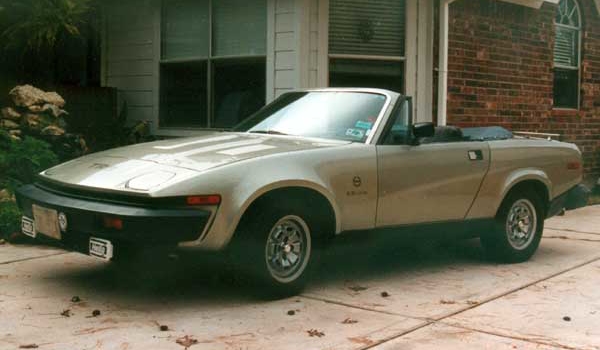 Bruce tells us about this nice-looking platinum TR-8:
This is our second Triumph; the first was a TR-6. Long-time club members will remember this car as having belonged to Ray Mompier. We purchased the car from TTR member Mike Gruy.
I have to admit the TR-8 was Cammie’s idea. From the first time Ray took the time to show her the car at a club meeting, it was what she wanted. I mean, she wanted THIS car, and by round-about circumanstances, we came to purchase it.

I like the idea of having a V-8 engine to play with, and the ideas keep popping into my head. I’ve had to put more work into the car than I first thought (believe it or not), but right now the car is running great. I have rebuilt my first transmission with help from Ron Harrison, replaced the springs and shocks, main bearings, distributor, fuel pump and sending unit. I have also replaced the cooling fans and am trying to get the air conditioner to work (most Triumph drivers know of A/C from their “other” cars). I still have some work to do on the A/C, but hope to be ready for summer.

I’ve also put in new carpet, had the seats re-padded and added a new stereo and speakers. Work to be done in the near future includes an overhaul of the driver’s seat, a new exhaust and a rebuilt wiring harness. Longer-term goals include an engine rebuild with some improvements, 15-inch wheels, larger front brakes (or maybe four-wheel discs), paint and a limited slip differential. Most people would leave their car stock, but with five TR-8s in our group and four of them platinum with tartan blue interiors like ours, I want ours to be a little different.

For now I look forward to driving the car, particuarly the trip to Breckenridge, Colorado, for the VTR national convention. Cammie and I have taken the car to New Mexico, but that was on a trailer and that’s just not the same! 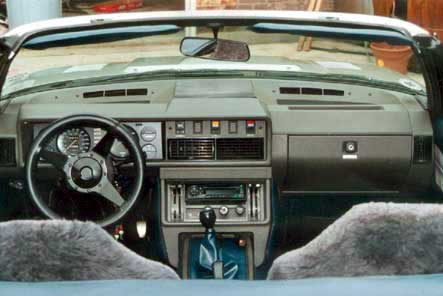