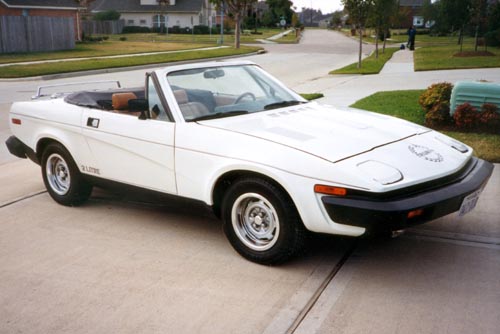 Nobody likes TR-7s, but we do, having owned a total of six now! Our first was the yellow fixed head used in the UK â€œNew Avengersâ€ programme, known as the â€œPurdie TR-7.â€ Unfortunately this was wrecked due to a rear end collision after six days of ownership… not a good start!
A green fixed head followed, which was sold to fund a new house after getting married. We continued to admire these controversial and underrated beauties, and fifteen years later, our desire became a reality with the purchase of another fixed head, and then our first convertible, which needed extensive restoration due to the dreaded â€œUK tinworm.â€

After enjoying the â€™7s we branched out into a â€œGrinnell conversionâ€ TR-7 V8 which we really enjoyed. After total restoration, the car was sold when we were offered the chance to emigrate to the USA. After a short flirtation with a TR-6 in Ohio, we moved to Texas and purchased this white TR-7 in nearby Dickinson, after seeing it advertised in the Houston Chronicle.

The car was apparently a donation to the Young Volunteers of America, and then it was sold in an auction. We have failed to contact the previous owners to get the full story. The car is in excellent condition and is very original with 45,000 recorded miles, which we believe to be genuine. We have enjoyed driving the car in the Texas sun, which is something new to us, but the urge for V8 power has again tempted us into the purchase of an original TR-8, which we are now restoring. Watch this space for progress on this latest project… 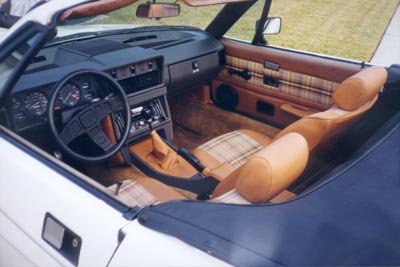