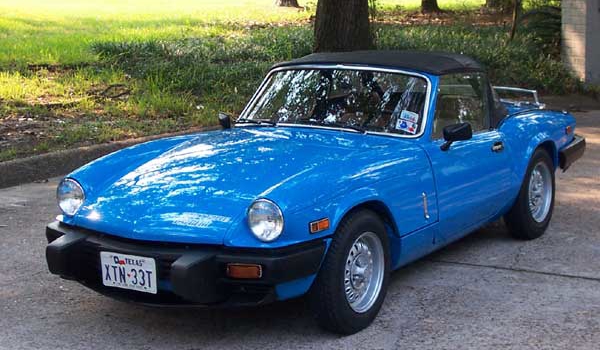 A truly Triumphant car, with a national Best of Show to prove it. John tells about this blue beauty:

According to its Heritage Certificate, my car FM96664-U was built as a North American Export Model with left hand drive. It was built between November 6 and November 8 of 1978. The car left the factory on November 11 and was shipped to Jaguar Rover Triumph, Inc. in Galveston, Texas.

I first saw the little blue Spitfire in May of 1993 when it showed up in my driveway. It seems one of my son’s friends was moving out of Houston and did not have room for a second car at his new location. My son figured I would be interested and brought it to my house. A quick visual inspection revealed that the car had a pronounced lean to the left and was missing all of the pollution devices. The good news was that the car was totally rust free, laser straight and pretty much stock except for the missing pollution controls and the ignition system. I drove the car around the subdivision and it ran great beautifully. I purchased the car that day

I drove the car for several years in basically the “as purchased” condition. Along the way many problems were identified and fixed. I attended my first VTR Regional event and participated in my first Concours in Georgetown, Texas in 1997. We did not place in this first event but the seed was duly planted.

Finally, in 2002 the decision was taken to paint and prepare the car for Vintage Triumph Register Concours competition. In this effort the car was disassembled completely. After cleaning, the body, frame and suspension parts were all painted the correct colors. After painting the car came back together nicely. The only problem was that everything that was taken off of the car was no longer good enough to put back on. Virtually all components were either cleaned and repainted or replaced.

After the restoration our first competitive event was the 2004 VTR South Central Regionals in Norman, Oklahoma where the car won Best of Class in Spitfire Mk IV/1500 Class. We next entered the Keels and Wheels Concours d’ Elegance in Seabrook Texas where the car tied for Best in Class. The next event entered was the 2004 VTR Nations in Richmond, Virginia. We worked hard on the car to prepare for the nationals addressing many potential deductions previously pointed out by VTR judges. In Richmond the car took Best in Class in the Spitfire MkIV/1500 class.

The plan is to now drive and enjoy the little blue Spitfire.