Len writes: This TR-6 was built June 17, 1976, shortly before TR-6 production ended the following month. The car was shipped to Galveston Texas on July 20, 1976. It was sold to the original owner by Auto Sports Ltd. of Houston on February 2, 1977. I am the second owner per the title. An interim owner, who never registered his ownership, purchased the car from the original owner in 1980, disassembled about 90% of it and had the body repainted. The TR-6 then sat in pieces in various warehouses for 18 years.

During the 1998 Houston All-British Motor Vehicle Expo at Traders Village, I was approached by the interim owner about his selling the car . My son Jeff and I inspected it and found no accident damage or rust, but we did not know if all of the bits and pieces were with the car, as it had been moved several times. We made a deal anyway and the seller had the car delivered to my garage, along with many NOS parts, a second drive train and parts from a 1971 TR-6. The car turned out to be complete, with parts in many coffee cans, boxes and miscellaneous containers.

The body had been repainted with an epoxy paint and clear coated, but it had never been color sanded nor polished. In addition, the underside had not been painted nor the frame removed. Independent Body & Paint (a Bluebonnet advertiser) color sanded, polished, removed the frame and painted the underside. I had the frame, all running and suspension parts, wheels, oil pan, air cleaner and valve cover powder coated by Allied Powder Coating. I highly recommend this process. The parts look great, and the treatment eliminated a lot of cleaning and preparatory work that I would have done. The powder coated finish is so slick and hard that dirt just wipes off.
The transmission had been rebuilt prior to the car’s long hibernation and was in excellent condition. I overhauled the engine and reassembled the frame and mechanicals to a completed and rolling chassis. Independent Body & Paint then mounted the body onto the frame and I finished the project. I replaced all brake-related items, rebuilt the suspension, bought new tires, a new interior and top and a lot of other things.

TTR member John Huskisson painted pin stripes to match the interior. Ron Harrison helped with some of the mechanical procedures that were beyond my knowledge, and by ordering many of the parts through him, I saved a considerable amount of money. The goal was to put this Triumph back to a condition as close to new and original as possible, with a few safety, comfort and reliability upgrades.

The project was basically completed about July 1999, but I still have a few minor items to complete. The car’s first real outing was the B&B Weekend to Palestine and Rusk. We left Houston with only a few miles on the odometer since the restoration was completed; the ’6 performed almost flawlessly over the entire weekend and the several hundred miles that were accumulated. This TR-6 is the most comfortable and easiest driving of the three Triumphs that I own. However, we have created a shortage of garage space as only four cars will fit into our three car garage, and we may have to build a garage at the lake house to house Triumphs. 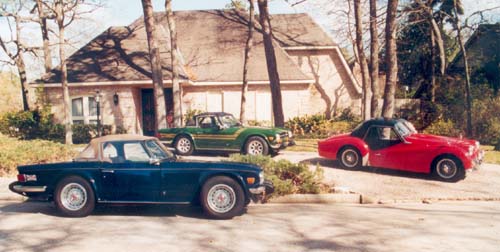