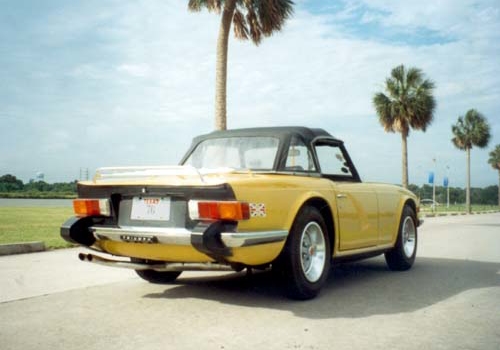 The Masons’ TR-6 was featured in TTR’s newsletter The Bluebonnet a dozen years ago, but this striking mimosa yellow car deserves another look. The Masons purchased the car from the original owner in 1981. Since then, one minor and one major restoration have been undertaken.

The Masons have taken several awards with the car, including first in its class at the 1988 Vintage Triumph Register National Convention. John has more to say about the car than can fit in our usual Car of the Month format, so this month’s feature is longer than usual. 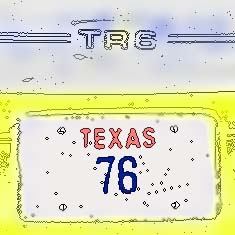 The car now known by its owners as “Texas 76” started life on the Triumph factory floor in November 1975, the fourth month of the last year of TR-6 production. Destined for sale in Canada, it may have been one of the last new TR-6s delivered. Despite its November 1975 construction date, the car was not sold until March 1977, a full nine months after TR-6 production ended.

The car was purchased new from Decarie Motors Ltd. in St. Laurent, Quebec, by Mr. Momcilo Pokrajac, who took delivery on March 14. The original sales contract shows the cash price of the car without options as $6,000 Canadian and the total sale price as $6,722.90. The car was equipped with only two options, an AM/FM radio and undercoating, which each cost $100.
Mr. Pokrajac put a little over 25,000 miles on the car in Canada before moving to Houston in the late 1970s. Records show the last service in Canada at 25,000 miles and the first in Houston at (the now defunct) Southwest Motors on November 3, 1978 with 26,328 miles showing.
In late 1981, Mr. Pokrajac decided to sell the car, and he placed an ad in the (now defunct) Houston Post. John Mason responded to the October 31 ad and he and wife Barbara purchased the car. The odometer showed 34,689 miles. The original (except for the oversize blackwall Michelin tires), one-owner TR-6 had found a new home in Texas. 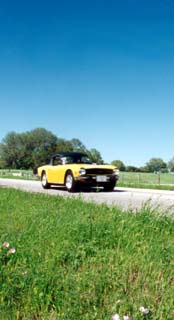 John and Barbara thought the car looked OK, but not great. They decided to repaint the car in its original color, put on a set of correct red-line tires and install a new top. The interior was in excellent condition and needed only a good rubdown with Armor All. The Mason’s thought they had “a pretty snazzy car” when this unsophisticated restoration was completed in mid-1982.John and “Texas 76” joined Texas Triumph Register in late 1982. After attending several meetings, his interest flagged. Most of the members owned TR-3s that were under restoration. Not another TR-6 was to be seen at meetings; in fact, John was about the only member to drive a Triumph to a club meeting. He lost interest and stopped attending.
At left, The Masons with Texas 76 during the 1997 Gary Johnston Memorial Bluebonnet Run

In 1985 John and Barbara rejoined the club, finding a lot to do and a lot of fun in the form of road tours, regional meets and the like. John felt the organization was quite different from just a few years before. “Texas 76” placed third in its class at the 1987 Vintage Triumph Register South Central Region meet in Granbury. After reviewing the judges’ scoring, the Masons made a big decision.
John would undertake a second, more extensive restoration in an attempt to place in the TR-6 competition at the 1988 VTR National Convention in Dallas. English Sports Car Clinic (now defunct) was selected to do much of the work. Eric Hess of (the now defunct) MasterCraft Auto applied the new paint in the original Triumph mimosa. The car was ready in time to take a first in class, three-foot tall trophy at the 1987 Houston AutoRama, held over the Thanksgiving weekend. 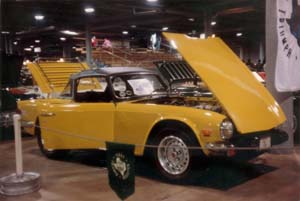 Texas 76 at the 1987 AutoRama
John and Barbara’s main goal was achieved as well. “Texas 76” placed first in its class at the 1988 VTR National Convention in Dallas. As an added bonus, the late Ken Richardson of Standard Triumph fame visited the Masons in Houston after the convention. 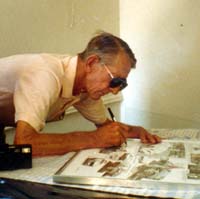 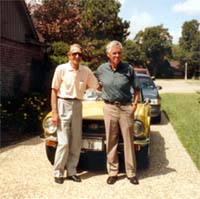 Since 1988, “Texas 76” has placed in many regional meets. However, John notes that any car, no matter how well-cared for, has a way of not getting better over time, and after 11 years John and Barbara plan a third restoration for their yellow beauty. 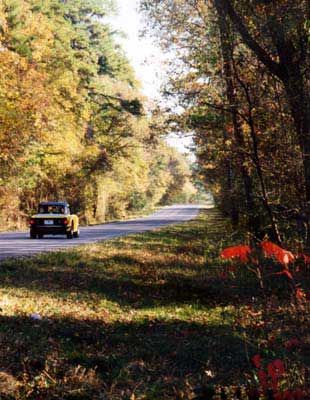