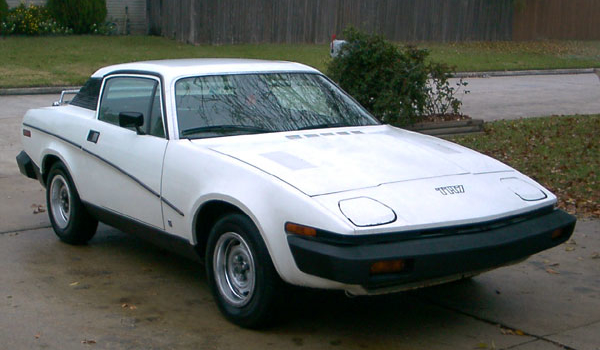 Toni tells us how a free TR-7 became daily driver:
Commission #ACL6198U was originally assembled in June of 1975. Some time after that, TTR member Jeff Meyers aquired the car, which had been mostly disassembled. In April of 1998 he mentioned that he would donate the car to anyone in the club willing to return it to driveable condition.
I â€˜took posessionâ€™ of the car on my 15th birthday in June of that year. My dad and I spent the next 28 months replacing, rebuilding, and repairing various components of the car.

The 4-speed transmission and differential were both badly seized, so we replaced them with 5-speed components obtained from Pick-A-Part. The engine was completely rebuilt with new pistons, rings, timing chain and gears, bearings and seals. Brakes and clutch were both completely rebuilt using DOT 5 silicon-based brake fluid. Severe corrosion of the battery tray resulted in the battery being relocated to the trunk, a-la TR-8s. Other than these major rebuilds and modifications, the job consisted mostly of further disassembly, cleaning and reassembly with the replacement of required bulbs and fuses and other minor pieces. The car is being used as a daily driver, so we did not restore it to the pristine condition of many of the clubâ€™s cars.

I started driving it regularly at the end of October, 2000. It is certainly unique in the school parking lot!