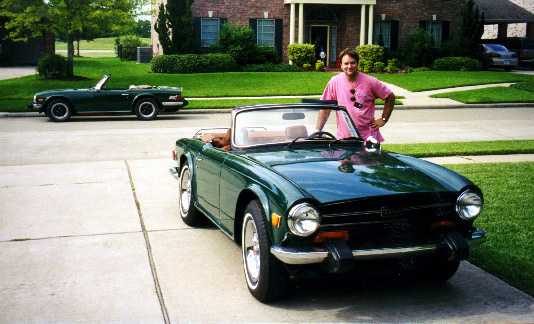 TTR member Peter Conover has taken a position with the Chicago Symphony, so he, his significant other and this shiny green TR-6 will be leaving Texas this month. We wish them all the best of luck. Peter writes:
For four summers I had seen a partially unassembled car under a pile of boxes in the garage of a colleague’s husband during our annual Houston Symphony “Sounds Like Fun” concert series party. He bought it in 1985, drove it a few weeks, and took it apart to fix “a few things,” never to finish the repairs or drive it again. Since I had an interest in having “a little sports car,” I had always said, “Let me know if you ever want to get rid of it.”

In 1996, he said okay, and we quickly made a deal. I brought it home on Labor Day (how prophetic), and started finding out what needed doing. More importantly, after quickly joining the TTR, I found what it meant to have a Triumph. With lots of support from TTR members, for which I would like to express my thanks, it was back on the road in May 1997. After finishing most of the mechanical work by February 1998, I had it painted this spring, and got it back on the road last month. Now I look forward to moving it and driving it around its new home in Chicago.