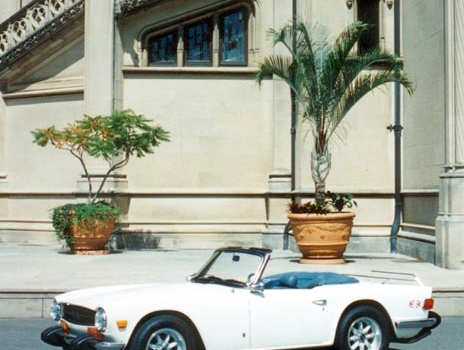 Don tells us this about his award-winning ‘6:
“I saw a white TR-6 on the cover of a British Leyland sales brochure back in 1970. At the time, I had a yellow TR-250, and the clean, crisp, long-hooded TR-6 looked like a piece of marble sculpture to me. I knew I had to have one of these new Triumphs someday.

“In 1978, I finally purchased a 1974 TR-6 from the original owner. My only criteria was that it had to be white. I drove it daily, except in the dog days of summer, until the odometer hit 100K and the total restoration began. My goal was to complete the restoration by the 1988 VTR National Convention in Dallas… I didn’t even come close! I may still hold the record for the longest, if not largest, order to TRF, 10 pages single-spaced!

“The restoration project went on hold during ’88, ’89 and ’90. New goal: ready for the 1992 VTR Nationals in Savannah… didn’t make that either, but came close! We went to the convention anyway and came home with a new resolve when we couldn’t race at Roebling Road Raceway. Now our goal was to complete the car in time for the Houston AutoRama. It was completed in November 1992 with time to spare for adding lights to the TTR club display.

“I began the restoration by ordering new parts for everything rubber, plastic, wood, glass, electrical or named a gasket or bearing. I’ve restored several cars since I was teenager, but never did one as thoroughly as this TR-6. All work done, with a little help from my friends, was great therapy for me.

“The car has been at every VTR National and South Central Region convention since its completion. It’s been fairly successful in the concours, but I wish it could teach me to drive a better Autocross. The goal in this restoration was not to build a ‘show car’, it was to rebuild a sports car. I love to drive it. When it runs good, I run good. Of the trophies it has, none are more cherised than the ones for racing. My new restoration partners, Louise and Dusty, are about to agree that the next project car gets to be built for racing only.”

The main photo above shows Don’s pristine TR-6 at the Biltmore Mansion in Asheville. The smaller photos here show the car in racing trim and posed in front of Houston’s skyline. 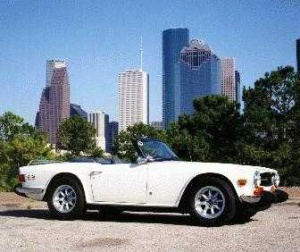