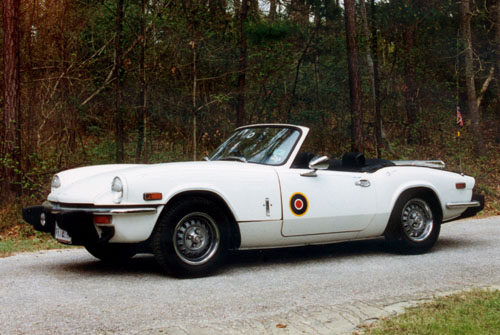 Paul and Nonna Porter almost bought a new, white 1974 Spitfire when they were married that year, but settled for a lesser car as more practical. More than 20 years later, Paul came across a white 1974 Spitfire that had been stored for 19 years and showed only 21,201 original miles on the odometer. The car needed work, everything mechanical was corroded and frozen, but old emotions overcame reason and in December 1995 Paul and Nonna had their Triumph at last.
Five months of “late nights and weekends” put the car in order just in time for the Porters to take it on an anniversary trip to a bed & breakfast in Fayetteville. Paul has driven the car in almost every TTR driving event held since then, and took a second place in class at the 1996 Houston All British Motor Vehicle Expo at Traders Village. The car was also shown in the TTR display at the 1996 Houston AutoRama and was one of only two Triumphs to brave the sub-freezing weather to participate in the Auto Nation grand opening display.

Everything mechanical on the car has been overhauled or replaced except the transmission. As for cosmetics, a walnut dash sets off the completely new interior, which incorporates seats beautifully reupholstered by Paul’s sister-in-law.