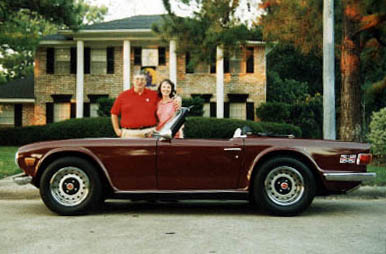 Richard and Diane wanted a fun car to echo the experiences of the MG that Richard drove in college, and they decided to give themselves such a car as a 20th anniversary present. After meeting TTR members Don Carter and Dusty Nicholson, Richard and Diane were convinced to purchase a TR-6, and they joined Texas Triumph Register while looking for the right car.
The “right car” was located in California through an advertisement in Hemmings Motor News. Richard’s brother inspected the car and confirmed its condition. The car was delivered to Texas in August of this year, a little later than the anniversary, but no less welcome.

To date, Richard and Diane have had a lot of fun with the car, and no surprises. Little problems have arisen, but fellow TTR members have stepped forward to offer assistance, advice and opinions, and the Dicks’ maroon “Anniversary Edition” has become a regular at TTR events.