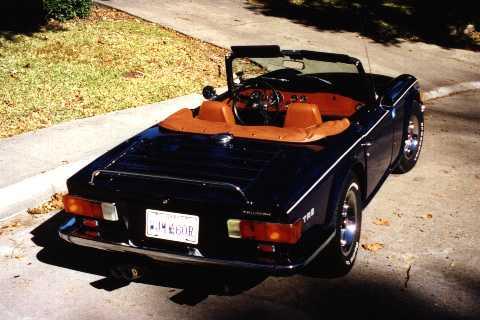 The Wakefields first encountered this TR-6 in a forest-surrounded North Houston garage in residence with an MG. As John puts it, “It begged us to take it home and we did, happily.”

To say it had been neglected is an understatement. The shocks and front end were both pretty well gone and the interior was held together with duct tape, but worst of all, it was painted a cream beige Ford color (the same color referred to by one automotive writer as “Ford Racing Beige”).

John says further, “We and ‘TR’ have been members of Texas Triumph Register for less than a year, but have enjoyed the comeraderie and events in which we have been lucky enough to participate. We loved Ft. Worth’s convention and look forward to Oklahoma. So does ‘TR’ because we’ve promised a new clutch prior to the trip. 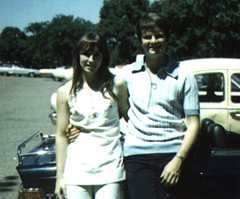 “We purchased our first Royal Blue TR-6 new in 1971 (that’s it behind the younger version of ourselves in the small photo), and traded that one in on a new Maple ’74. We were able to keep that one for about ten years. This latest TR-6 we purchased in late 1996 to fill the void that had been in our lives since the mid-80s. A judge that loves blue at the Houston AutoRama must have been judging in the Foreign Sports category, as the car was awarded a First in Class.”