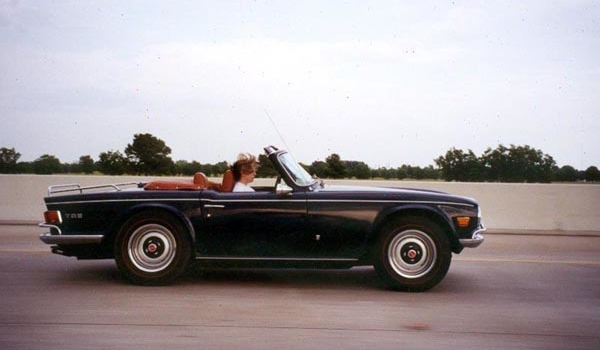 (John stayed home this day.)
After the August 1999 TTR membership meeting, your web master was sitting in line at a toll booth waiting to move up and toss his coins when all of a sudden there was a ROAR coming up from behind and then VAAAROOOOOM this dark blue TR-6 blasts through the EZ Tag lane without even a perfunctory tap on the brakes.

Dust and dirt are flying and your amazed webmaster was thinking “Holy Cow!”

I tossed in the requisite payment and stomped on the gas to catch up, but the ’6 kept pulling ahead at a rapid clip through fairly heavy traffic. We both hit an open area and I pushed up to 90-95 mph to catch up, then dropped back a little and paced; the ’6, with Cissy at the helm, was moving competently at a steady clip just over 80 mph.

That’s when the photo above was taken.