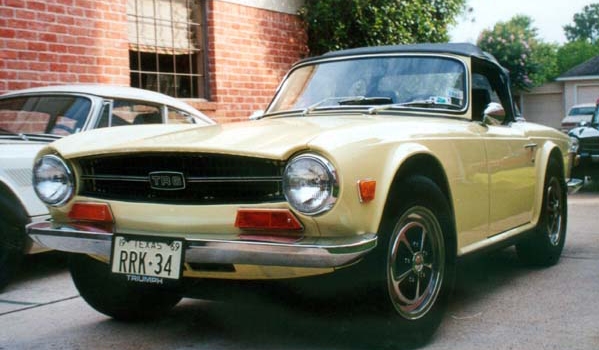 Clarence tells this tale about his Jasmine TR-6:
I purchased the car in March of 1997. At the time I owned a 1970 TR-6 and a lesser car (translated: Miata). I was NOT looking for another Triumph, mind you. The one semi-permanently “stalled” in my driveway was enough, but this car piqued my curiosity because it started with the turn of a key and it ran.
After having a not-so-good TR, it becomes rather easy to spot a good one. I quickly realized that I had found my restoration candidate. I spoke with the original owner, Bob Lee, for a couple of hours about the car and shared my intent for the car if I were to buy it. He was pleased that I planned to restore the car to its rightful condition since he had so carefully maintained it during his 28 years of ownership. He told me that I could have all of his spares in the deal too. Little did I know what I was in store for when I took delivery of the car. The seller of my last TR said the same thing and I got a Folgers can of rusted nuts and bolts. When I went to Bob’s house in my wife’s Maxima he stated that, “You won’t be able to carry the parts home in that!”

I walked into his garage and there were so many boxes, bags and parts in large boxes that I had to go get a truck to haul them home. He had begun to amass parts as he saw them deteriorate and had never quite reached the point of installing them. Just to name a few, included were a new windscreen, luggage rack, steering wheel, original hubcaps (in mint condition), front spoiler, aluminum valve cover, many interior parts, two new side-view mirrors, duplicates or triplicates of virtually any routine wearing parts such as tune items, brake pads, clutch and brake master kits and much more. Just try to imagine Christmas in March and you can understand how I felt. I stayed in the garage until 3 a.m. opening boxes and bags and packets from Moss, Victoria British and TRF and taking inventory of these parts. When the dust settled, I had nearly $4,000 in mostly new parts. I literally felt that I had stolen the car at this point. 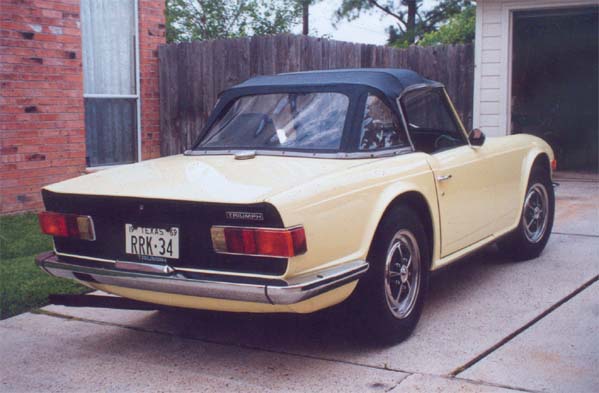 Now I must admit that I had planned to change the color to British Racing Green when I purchased the car, but I soon realized that this would be a huge mistake.  The “purist” in me did not let that happen, and for the better as it turns out.  I did not realize then just how unusual it is to see a TR-6 in this color.  While I am rambling about color I would like to share a story on how Bob “chose” the color.  Bob needed a second car in his family, not a big car, just something for his wife to drive back and forth to the store.  So off he went to Morristown European Motors in Morristown, New Jersey, to buy a 1969 Spitfire.  He was quickly informed that a dock workers/shipping strike was underway in Britain, causing lengthy delays in arrival of product to the dealership.  Bob’s name was placed nineteenth on a waiting list.  Nearly three months later, he was notified that his “ship had come in.”  He eagerly joined the salesman dockside to see his car.  It was then that he was told of how the waiting list worked:  You are No. 19 on the list, so the nineteenth car off the ship is yours, or you have first right of refusal and can go to the bottom of the list.  With no hesitation Bob replied, “I have waited three months for this car.  I will take whatever comes off the ship.  I need a car now”!

So, luckily for him and me, No. 19 was a Jasmine TR-6 with black interior.  I have overhauled the brakes, exhaust, front-end, suspension and carburetors.  I have installed electronic ignition, an oil cooler, an electric fan and many interior and exterior parts.  All of this work was performed before I had the paint work done.  I had the paint work performed by Rudy and crew at British Auto Body on Old Richmond Rd. in Richmond.  I am quite happy with the car.  I have plans to continue an effort to bring the car even closer to original fit and finish in the coming months – or was that years?  Oh well, I’ll drive a little, work a little and sooner or later I’ll have it where I want it. 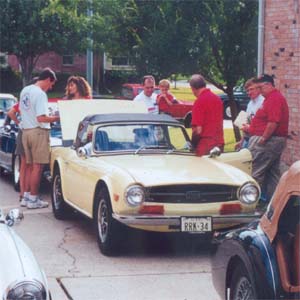 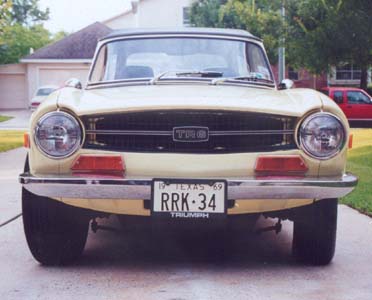