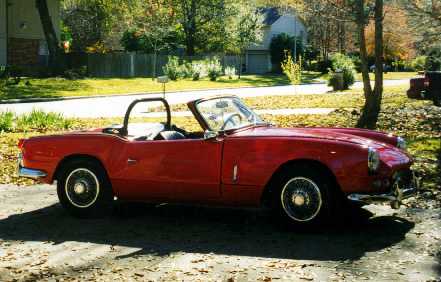 This Spitfire is owner Rand Warzeka’s second; he bought his first early Spitfire when he got out of the service some years past. Rand located this one in Wisconsin last year, and he drove many miles in July to bring the red car to Texas on a car dolly.
The paint job is seven years old and in very good condition, as the car was garaged by the previous owners during the harsh Midwestern winters. The car is all original inside and out. On returning to Texas, Rand had engine work done by Sal’s Imported Cars in Porter, north of Houston.

Rand has rallied and shown the car. He says, “Last November I entered the SCCA Solo II Auto Cross and came in third. I showed with other Triumph club cars in the last AutoRama. The car took Best of Show in British Cars at the Kingwood Car Show this last October. I would like to enter more shows, especially concours events.”