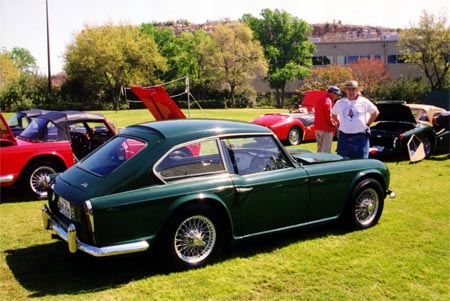 Very few Doves were built – reportedly between 55 and 100; approximately 33 still exist. They were given full warranty and the official designation of GTR-4 by Triumph, a reflection on the quality work of the Sussex coachbuilding firm Thomas Harrington which re-bodied TR-4s for then Wimbledon Triumph dealer L.F. Dove – from which the Dove derived its name. The Dove provided a 2+2 option for Triumph enthusiasts with small families, albeit with premia of 30% in price and 400 pounds in weight. It pre-dated the MBG GT by two years.
David is one of very few people to have owned two Doves. While pursuing research to restore his first Dove, David visited with several Dove owners in the UK, and became friends with the owner of CT 23118. Even after David reluctantly sold his first Dove to concentrate on his ongoing TR-4A restoration, they continued to exchange e-mails for over a year. In January 1999, during a business trip to his native England, David bought CT23118 and shipped it to Houston. It was purchased as a weekend/club driver that also needed minimal work (to be “correct”).

David was attracted by its original performance options: The balanced engine, special valve cover, rear end and close ratio gearbox, which coupled with the factory rebuilt overdrive on 2nd, 3rd and 4th gears provides very responsive and triple digit performance. David experienced this directly in a high speed TTR convoy to/from San Antonio, where the Dove garnered over 350 points and second in class at the VTR Regional Concours in March of this year. David also prefers its Triumph Racing Green, which seems to suit its shape more than the Signal Red of his first Dove.

This car also benefits from full mechanical rebuilds in 1975 and again in the 90s. Its last owner was able to verify its authenticity and accuracy from talking with original Harrington employees responsible for the Dove, including at Harrington’s Centenary gathering in 1997 where it was voted Best of Show. The car is believed to be the only known example with the rare (green) tinted glass option. Possibly even rarer than the car itself are the pre-production brochure and individually numbered Dove tail badge (only a handful of cars received such badges), which David acquired with the car. David’s two year old son, Andrew, equally proudly informs all visitors that the MG is now in the driveway and “Its A Triumph!” is now in the garage ready for “Club Meeting”.

David would love to hear from any one with original documentation, photos or equipment (to copy or buy) or any information about Doves. Contact him via email at david.fowler@compaq.com 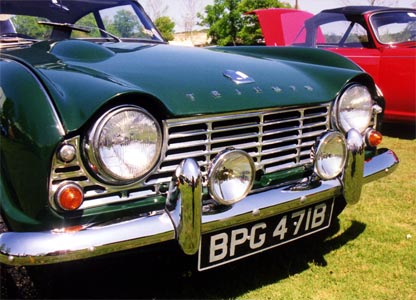 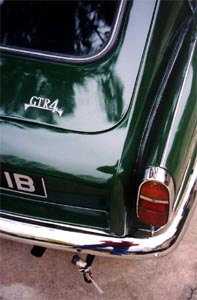