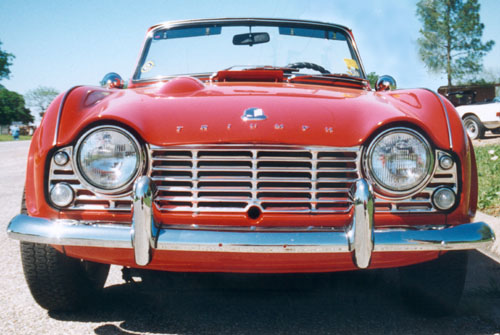 in its class at the Triumph Register of America National Meet in Hudson, Ohio. The car probably would have taken first at TRA if it had been shown with original steel wheels rather than Panasports. (The freshly-restored steel wheels were in place for the VTR national.) Vern drove the car to both events, the relatively short drive from Houston to Fort Worth a breeze compared to the 1,377 miles from Texas to Ohio for the TRA meet, much of that journey in driving rain.
The bright red car has taken a number of other awards: 1st in class at the 1997 Houston All-British Motor Vehicle Expo; 2nd in class at the 1997 VTR South Central Regional in Georgetown, Texas (again, just out of first because of the Panasports); Participants’ Choice at the 1996 Austin British Car Day; and 3rd in the modified sports class at the 1996 Houston AutoRama, where the gleaming Triumph was pitted against some of the area’s finest Corvettes and other heavy U.S. iron!

Vern purchased the car in June 1996, and has since been working to finish out the 1987 on-frame restoration initiated by a previous owner. Vern’s ultimate goal is a totally original 1963 TR-4. However, it looks as if this TR-4 will be better than new when he is finished. 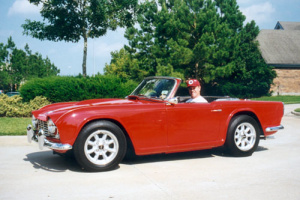