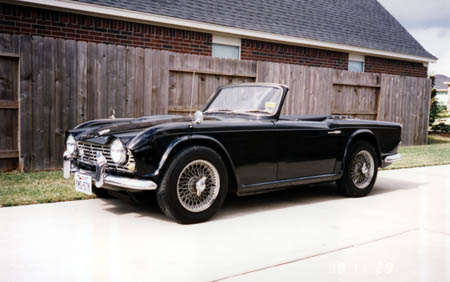 This wire-wheeled black beauty has a new home. Bill tells about his recent purchase: “I had been looking for a nice Triumph for a while – one that was nice and original, and could be driven while I fixed minor things. I’ve always wanted a TR-4, but most of the ones I found were either in boxes or should have been. I began to look at TR-6s, assuming that a nice TR-4 that I could afford would never show up.

“It was a trip to Hamilton Motorsport to inquire about a rumored TR-250 for sale when I first saw this really nice original car. Not only was it a really early TR-4, but it was rust-free, ran great and had been owned by the same person since 1965!

“Unfortunately, it was a little out of the price range that the boss and I had agreed on, and I continued my search. On my next visit to Hamilton, the car was still there, and after the necessary negotiations (with the boss, not the owner), I bought the car on November 19. I have begun to replace small trim pieces and broken knobs, but I want to keep the car as original possible while still driving and enjoying it.”