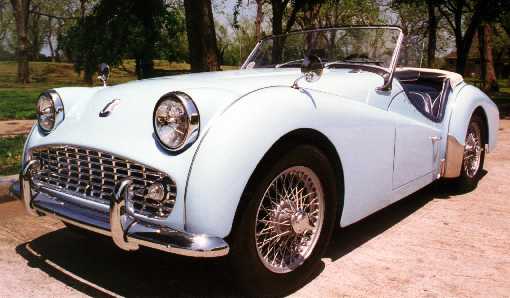 This car was purchased in 1990 with the intention of “just fixing it up a bit so we can drive it.” Seven years later, in March 1997, the restoration was complete, and this beautiful car was back on the road. The job was accomplished with much help from friend and consultant, TTR member Steve Foster.
The car was finished in its original colors, powder blue exterior and midnight blue interior. The original parts were refurbished and used wherever possible.

This was Ron’s first Triumph, but during the restoration he acquired five others – only the 3B is running.

Ron worked on several other Triumphs over the course of this restoration, and thanks those owners for allowing him to practice on various procedures before attempting them on his car!

The car currently is “standing at stud” as Ron puts it, meaning he is ready to tackle another car for someone else. It no doubt will be a beauty, too.