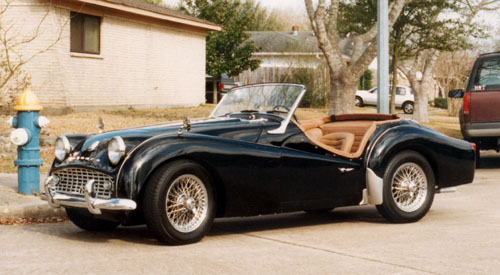 Dwain King, along with Steve Foster and Mike Murphy, was a founder of the Texas Triumph Register in 1981. Dwain completed the restoration of a red TR-3A with his trademark burled walnut instrument panel and cubby box door prior to his untimely death in 1995.
The car pictured here, owned by Dwain’s daughter Laura, was to be his “show car.” The car is black with a tan interior, burled walnut dash and 60-spoke chrome wire wheels. The actual “show” part of the car is the chrome, which resides on every piece that is removable! This includes not only the obvious parts such as horns, dynamo, starter, windscreen wiper motor, water pump, oil filter sump, etc., but extends to include the braces under the dash, hand brake mechanism, windscreen demister nozzles, and every nut, bolt and washer.

In this day of emphasis on concours restoration, it is refreshing to see a TR-3 that has been done to please the owner rather than the judges. Thanks, Dwain, for “doing it your way.”