Here’s the story on Sam’s TR-3A:
The day the photo was taken for my TR-250’s Car of the Month entry (see the June 1999 Bluebonnet or surf to http://www.kingswayrc.com/txtr/com0699.html), I was given a ride in a powder blue TR-3. “Wow!” I thought to myself. “TR-3s are more of a kick in the pants that TR-250s.”
A few hefty mechanics’ bills later, my wife Lisa “suggested” that I sell the 250. Five days and an ebay auction later, my first Triumph was on its way north.
Within four months, the Triumph void was too hard to ignore.

I purchased this 1959 TR-3A locally in February 2000. It spent March and April at Hamilton Motorsport. Despite a faulty distributor, in June I finally got an opportunity to drive her a little and clean her up. Off with the 14-inch mags, and on with the traditional 15-inch steel wheels. Out with that ripped “occasional rear seat”, and in with the inboard fire extinguisher. Out with that stuck thermostat… whoops… stripped a bolt… caught the capillary tube of the temperature gauge… broken, just like that, with no replacements available.

Thank goodness for ebay. In August I got all the parts I needed (distributor, temperature gauge), and with the exception of a little vapor lock incident, the car has been running well. With our first child due in less than a month, the new powder blue coating is on hold. The Healey ice-blue chipped paint, complete with primer from an earlier dent to a fender, will have to do. 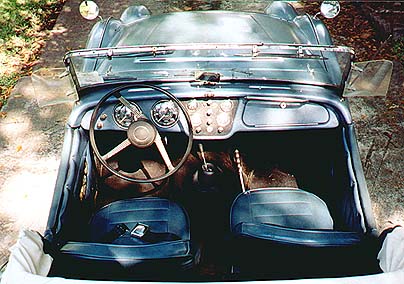