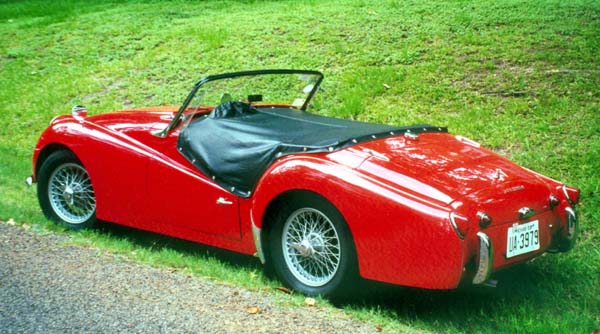 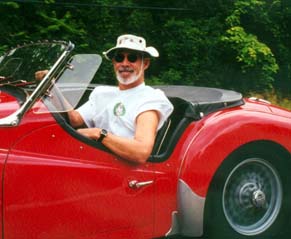 Russ Seto tells all about his beautiful red TR-3A:

TS 43694LO was born on Wednesday, Feb. 4, 1959, at the Standard Motor Company in England.  As it rolled off of the production line, it was black in color with matching black leather interior, and was equipped with a heater, white wall tires, wire wheels, overdrive and a hardtop.
When Mike Hado, one of our most renowned club members, introduced me to this vehicle in March of 1985, it was sitting in Bill Kitt’s British Sports Car Centre amongst other “junkers” in very rough shape.  It was some sort of maroon color, the hardtop was missing, and the car had disc wheels, fenders bashed in, rampant rust, holes in the body, a frozen engine and as I found out later, no overdrive!  (Well, the switch was there!).  Being somewhat stupid, and unable to curb my urge to once again drive a TR-3, I bought the car for $500.00 and towed it home.

Back in 1959, I bought my first Triumph TR-3A when I lived in New Jersey.  It was Signal Red with black vinyl interior, wire wheels, overdrive, and heater.  My two younger brothers and I drove that car to virtually every major sports car race on the East Coast, one of us having to ride sideways behind the front seats, with occasional “switching” of driver/passenger locations so that no one “suffered” for too long.  Those were the days…  and it was the desire to “relive” some of these experiences that drove me to purchase my current vehicle and begin a longer than planned restoration which finally culminated in a car of which I am very proud.

Within two weeks of bringing the car home, it was completely torn apart and scattered about the Seto property.  This car required a ground-up restoration, so I started with the bare frame and built up from there.  Fortunately, I had the foresight to take videos as I disassembled things, not realizing then how useful those videos would become years later as I tried to reassemble the car.  What I envisioned as being a three to five year restoration ended up taking thirteen years!  I learned an important lesson about working with friends, even when they are on the payroll. 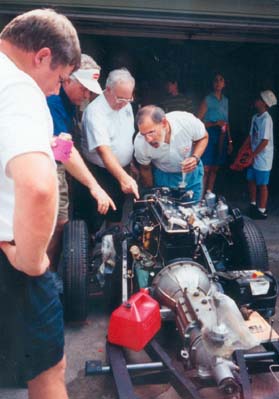 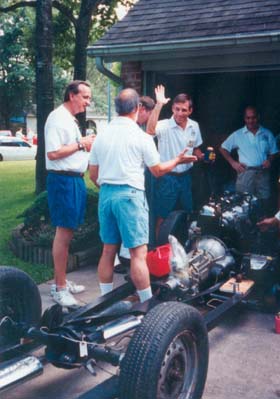 Interestingly enough, for all of the outside damage, the frame was straight and true when I checked it out.  Some minor welding had to be accomplished to the lower wishbone attachments, but the spring towers were straight.  New floor pans and outer sills were welded in.  Rust had severely affected the dogleg behind the passenger’s side door, so new metal was shaped and installed there.  There was also a large hole in the front right corner of the trunk, where water had sat long enough to rust through, but new metal was again shaped, fitted and welded in so that things were once again as they should be.  The left rear fender was bashed in so badly that repair would have been very expensive, but our good friend Mike Hado came to the rescue with a fender from one of his parts cars.  I also remember a rear half-shaft in there somewhere that Mike was able to provide when I ran into problems removing the rear hub.  Mike’s a good guy to know if you’re working on a “3”.

A friend of mine, Jerry, ran a small independent body and paint shop, and was responsible for almost all of the restoration work in repairing and painting the body of the car.  Although I paid him for his time, other car wrecks continuously got in the way at his shop and time passed.  Jerry would straighten and fill the various body panels as needed, and I spent hours wet sanding the surfaces to get them just right.  Jerry devised a simple cage out of tubular metal fence posts and brackets that he attached to the body/frame mounting points.  This allowed us to rotate the body on the ground and gave us access to all sides of it.  Jerry was a great body man and the work he did to the body was superb, but I found he was not a great painter, nor more importantly, a “finisher”.

I suspect the event that was most responsible for my finishing the car was when Vern Burnett, my neighbor, bought his TR-4.  Vern and I drove to several Triumph events in his car, and the desire to get my car back on the road increased dramatically.  I reclaimed the body parts from Jerry, finished assembling the car and took it to another painter to put the final color coats on it.

The car officially went back on the road in late 1997, sans interior.  It currently has over 25,000 miles on the odometer, and has been driven to several major Triumph events in the eastern part of the United States.  It took First place in its class at the VTR National meet in Portland, Maine, first place in our last two VTR regional meets, and came within two points of first place at the TRA meeting in Dublin Ohio.  This October it will be driven to Triumphfest in San Diego, Cal.

We haven’t been to any races yet in this car, but it sure is fun to drive!! 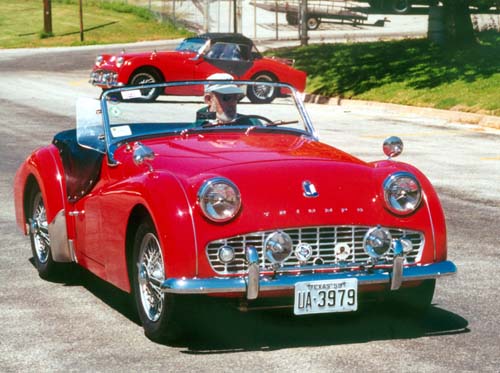