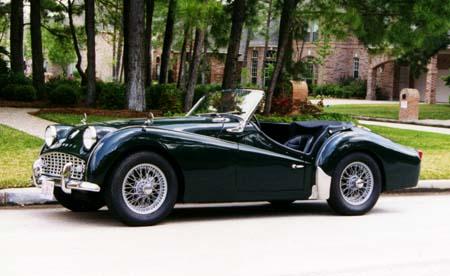 This British Racing Green beauty was transplanted to Texas from Massachusetts when owners Glen and Nancy McLaughlin moved to Houston in 1994. The restoration had started before the move, and the car came to Texas in pieces in the moving van with the household goods.
Glenn writes: “It has taken over five years to complete the restoration. When the car was purchased, Nancy thought I was crazy because not only did the car not run, but it was pretty rusty, had holes in floors, dents in the doors, terrible bent side curtains, and the engine was in pieces. A family of squirrels was living in the car – there were acorns and fur in everything, including one of the SU carbs.”

Glenn didn’t discover the carburetor situation until it came time to fire up the engine!

Glenn and son Bryon did most of the frame-off restoration. TRF rebuilt the engine and the final paint was contracted to a local paint shop. This is the first year the car has been on the road and shown.