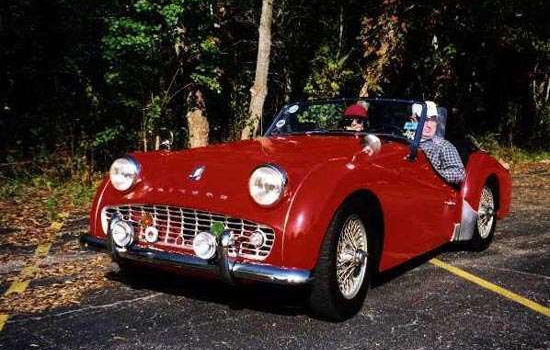 Steve Foster is this fine TR-3’s second owner; he purchased the car in 1975 as a driver. The classic red automobile was built April 5, 1959, delivered to the Houston area and on to El Campo, Texas.
In 1981, Steve began the mechanical restoration, followed by body, paint and interior. The work was finished three weeks before the first Texas Regional VTR meet at the T-Barm Tennis Ranch in New Braunfels. The wire-wheeled beauty has placed Second and Third at numerous regional and national events.

Steve notes, “This car seeded Ron Harrison’s interest in the marque. Later, Ron and I would rebuild the engine because of a broken crank and redo and upgrade the transmission, for which I express my thanks.”

This is a drivable car. Steve says, “I must say that this TR is always ready, willing and able to go anywhere at almost anytime, although the driver may not be, but that is a different story. I look forward to another 23 years of ownership and dependable transportation.”