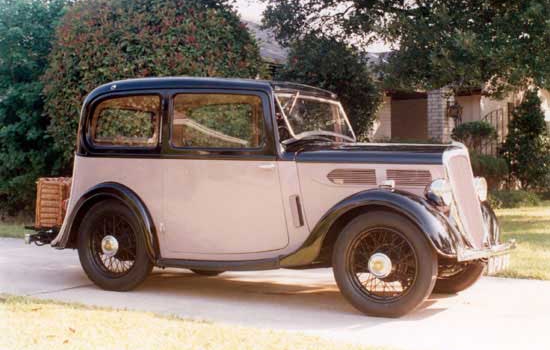 Chumbly’s story, in his own words:
My first breath was on Feb. 21, 1936, in Coventry, England. My 9 hp motor took me through the English countryside in rain, mud, sun and stars. My original owners were very, very good to me, taking care of all my needs under my bonnet and inside my cozy two-door saloon body.

During the war years, my owner was dispatched to an RAF base as a fighter plane mechanic and his wife became a fire brigade dispatcher. I was put up in a garage to save petrol for the war effort. After the war, I was dusted off, cleaned up and driven, not only by the owners, but also their children, until 1950. Then I was sold, to a Texan at that!

A Houston oil man bought me to use in England where he came on assignment. We both got along splendidly after he became familiar with my offhand steering and shift arrangement. He enjoyed my rear privacy curtain, hinged windscreen and side foot vents. My sliding sun roof and dipping head lamps were things he loved. He often used my fold down luggage rack for luggage or to carry a picnic basket on trips in the country. My illuminated trafficators amazed him, and still work. Then in 1960, I was put on a ship and sent home with him to Houston.

Transferred again, this time to Dallas, he had a garage sale before moving, properly in the garage, not the front lawn. An auto enthusiast who lived around the corner came by to purchase a rake. He entered the garage, took one look at me and said with a smile, “What is that? I’ve never seen such a cute auto!”

“Oh, it’s for sale, I can’t take it to Dallas.” My Lucas battery almost came back to life. Negotiations were concluded, and Ron and his sons Jeffrey and Jason pushed me around the corner to my new quarters. I felt special and in good company with the other antique autos Ron had. Ron and his sons took me apart, polished dull parts, upholstered me, took my heart apart and I started breathing Texas air. I was repainted my original colors, kept my original glass, lenses, plates, tools and booklets.

Lots and lots of people have enjoyed looking at me and my World War II picnic display. I also enjoy the friendship of the Texas Triumph Register folks. I’ve won some awards in Jaguar club shows and all-British car shows in Houston, Dallas and Austin.

If you get a chance, come by and say hi to me and my owner Ron Stein. We just love to have a spot of tea and chat.