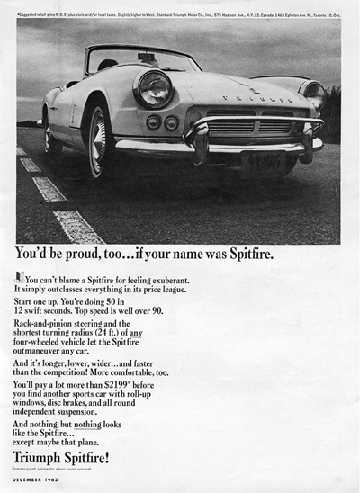 Triumph produced the fun and affordable Spitfire for 18 years, during which time over 314,000 were built. Launched in October 1962, the Spitfire featured sleek styling by famed Italian designer Giovanni Michelotti. As the ad at left says, “…nothing looks like the Spitfire…” The car was an instant hit.
A 1970 design “facelift” by Michelotti freshened the car’s look for the new decade, and accompanying chassis and suspension tweaks improved handling. A larger 1500cc engine followed shortly thereafter.

During the Spitfire’s 18-year history, Triumph promoted the little roadster’s virtues in the consumer press with colorful ads aimed primarily at youthful buyers. A few of those ads are reproduced here. This is our tribute to the Spitfire!

1977
“…still around while so many convertibles are not.”

1978
“A classic example of the survival of the fittest.”

1979
“…it seems that Spitfire drivers naturally have more fun.”